Git has been a revolutionary tool for online collaborative software development. Git annex extends git’s abilities to track and share large files in addition to code. Together these tools enable effective collaboration on large bioinformatics analyses. 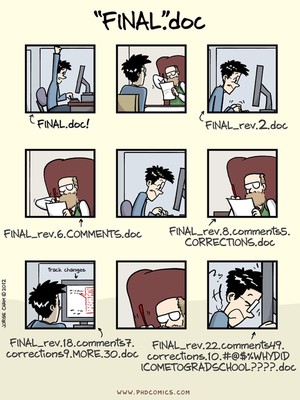 This post is a brief case study on using git-annex to version an analysis workspace between multiple collaborators. I’m not going to re-hash the excellent git-annex documentation, instead I’ll show how I have used it in my recent work.

We have been doing computation analyses for as long as there have been computers, so why bother with all this fanciness? In a nutshell: collaboration. To analogize somewhat loosely, tools like Google Docs are dramatic improvements over the traditional method of emailing around a million Word docs named like Document_final_v3_revisions_supervisorcomments-v2_final.docx. Similarly, git (and other version control software before it) made collaborative software development far easier and more accessible than mailing patches to some development mailing list.

But why git-annex specifically? Git itself was designed to work with code, but we wish to track not just our code, but also our raw data and some intermediate output data. The Linux kernel (for which git was originally developed) is about 30 million lines of code, totalling hundreds of megabytes of source code and accessory files. Despite being one of the largest and most active free software projects in the world, even the Linux kernel is dwarfed by nearly any modern genomics dataset: a single sample from the example Arabidopsis project below is over 1GB of sequence data, and the total project consists some 12TB of raw data. Git itself cannot handle this volume of data, and so various additions and extensions to git have been developed. git-annex is to my eyes the most applicable one to the typical biological data scientist 1.

How does git-annex differ from git? To a first approximation, it doesn’t. Git-annex works on top of git, detecting large files and tracking them as symlink pointers to a hidden data store. One can then separately coordinate syncing of these large data files, either individually or in aggregate. Aside from this, git-annex behaves nearly identically to git itself, largely because it is just a wrapper around git for most other operations, as we will see below.

I’ll be assuming you’re already familiar with git itself. If you’re not, or would like a refresher, I suggest either the git tutorial, or the software carpentry git course.

OK, so how do we actually use it? The git annex workflow is very similar to that of git. One makes changes, then stages, commits, and pushes them to a remote. The below commands give a brief outline of a hypothetical workflow.

For context, we are working on a large collaborative population genomics project in Arabidopsis, using the Acanthophis variant calling pipeline. We work on our laptops, and use a centralised large server and cluster (with shared file system) to perform the larger analyses. The following steps/tips aren’t necessarily ordered, and are to some extent specific to this analysis, but hopefully the example I give here is illustrative enough to be useful more broadly.

We need to configure which files are handled by git itself, by git annex, or are ignored by both. We have a snakemake workflow at the root of the repo, raw data (which can’t be recreated easily) in ./rawdata, a notebook in ./notebook which contains multiple shell, R, and python scripts with associated data, and computed data in ./data.

The above configs cause all files in ./data (but not other directories called data) to be ignored by git altogether. We then tell git annex to track any file larger than 10kb, excluding any shell, R, or python scripts. One can customise things further if there are certain files or directories that should always be considered either small or large (e.g. adding *.Rmd to the list of small files, or forcing everything under ./rawdata to be considered a large file and therefore tracked by git annex).

Staging, committing, merging, and diffing files or change sets operates identically to “normal git”. Both git add and git annex add will look up if files should be “large” (see previous section), and then either commit their changes traditionally, or commit them as large files. There is one caveat to that: git annex add (but not git add) takes a --force-large or --force-small argument to override the configs and force adding files as either large or small (traditional) files. This is useful if you have e.g. a very large data file that is named data.txt, which with the above config would normally be considered a small file.

Git annex behaves most differently when it comes to synchronisation. With normal git, there is often a simple process of pushing to GitHub, then pulling from GitHub to a third computer (perhaps a server, or a collaborator’s laptop). Git annex does things a little differently: synchronisation is bidirectional by default, and there is an additional layer/step to handle large files. There are also a couple of gotchas, which I highlight in the below code.

BEWARE: By default, git annex sync will commit any changes before syncing, unlike git pull which would normally error and ask you to either stash or commit them. Please make sure this is OK, or run git stash before git annex sync 2.

Also, note git annex sync alone did nothing to copy large files. To automatically synchronise all large files between all remotes, do:

However, I normally find it better to chose which large files to sync. In our Arabidopsis example, the ./rawdata directory has over 12TB of data files (mostly sample FASTQs). Obviously we don’t want that synced to my laptop. Instead, I want the various smaller computed files (e.g. filtered VCFs of some tens of GB), which are in my case under notebook/data/ (yes, this is a simplification of how I actually work, but it shows the principles).

To get (from a remote) some large files, use git annex get, and to copy some new large files to a remote, use git annex copy. One can specify a host with --from or --to as appropriate, or git annex will guess based on where it knows which hosts files are on. For example:

Say I then ran some analyses on my laptop to set up a popgen modelling analysis using a subset of this data. If I wanted to run these models on a server, I could then do (e.g.):

This would stage and commit these new input files as large files, sync the metadata to all remotes, and then copy the content of the new files to taco.

NB: git annex must be installed on a remote to sync large file content. If a remote doesn’t support git-annex (e.g. GitHub), then git annex sync will just sync the metadata even if you ask it to sync content, and you won’t be able to use git annex get/copy.

Git annex support special remotes, a generalised way of storing large file content. Unlike taco above, these remotes aren’t typical git repositories, but are file stores that contain only large files' content. One could for example use Backblaze’s B2 cloud storage to make some or all large files available to the wider world, without giving access to the local HPC storage, and without paying for the exorbitant storage and bandwith costs of git-lfs. See the git-annex docs for more info.